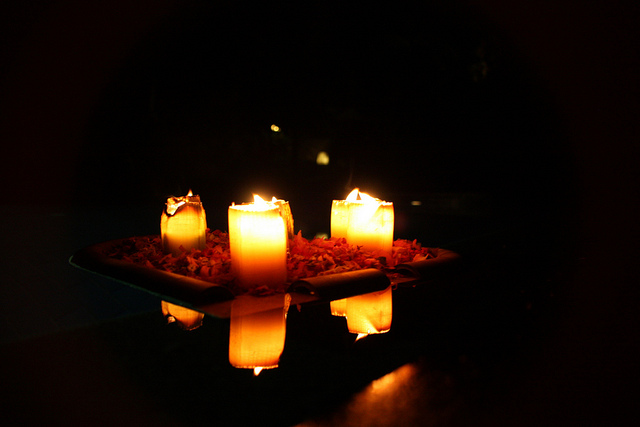 Forty brothers and sisters gathered around the ceremonial fire, surrounded in flowers, and bubbling with anticipation.  Modern tribes from several continents had joined to share in the sacred cacao spirit here in Ubud, tonight.

Song after song, rich with wild harmonies and free entranced voices.
Prayer after prayer, from hearts pregnant with love.
Spoken word incantations, calling forth the forces of Earth and the elements.
Eventually the dancing, the hugs, the drinking of the blissful chocolate elixir.

As the circle chanted “Shiva Shiva Shiva Shambo“, therein calling forth the positive forces of destruction, I wrapped my arms around my knee, curling into a little ball as the healing tears emerged like they so often do in Bali.

All afternoon, I’d been talking with expats, getting to know more and more of the local town and how others lived here, and somehow an old mental habit decided to make comparisons out of the lives they shared with me – comparisons that resulted in the crippling internal conclusion: “You’re doing it wrong”.

I recognized the mental habit, and I’d worked with several of my psychological tools to hear that voice and release it, to bring a sense of safety to the unfamiliar, to turn my attention back to my own joys, my own path, my own journey.  I’d worked hard to support myself back to peace, but I’d still brought a sad self-judgment with me into the ceremony that night.

When the circle’s mother-guide invited us, over the sound of the rising chant, to find what we could offer to Shiva for destruction, the self-judgement came up in sobs.

A few minutes later, I joined the small line that formed organically closest to the fire at the center of our circle, each awaiting their turn with for a cup of the cacao.  During a breath of silence, face still soaked with tears, I surprised myself by publicly asking for a moment to offer forth a prayer.

These are (roughly) the words that emerged.  I didn’t intend to write it down, but a couple brothers and sisters asked about it afterward.. so I’ll offer it forward.

The night that followed was rich with love, soaring with song.  Freeing, healing, blissfully ripe and raw, connected and refocusing.

May these words offer you another step of liberation also.

I ask that you burn out of me
Out of all of us
The voice that runs through the collective mind saying:
“You’re doing it wrong.”

The comparison that robs the joy from our hearts.
The self-doubt
The self-judgement
The self-blame.

I know they have served us.
We’ve used them to learn, to grow.
And for this, I thank them.

But they
Aren’t.
Working.
Anymore.

Ganesha, stomp them out with your elephant foot.
Those fears that no longer serve us.

And in the space left open
Everything can
Thrive.

3 thoughts on “The Space Left Open”