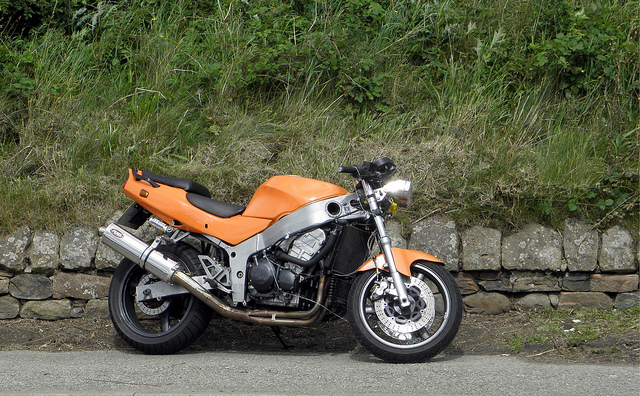 I recently had the great pleasure of joining a few friends for a weekend on the sparsely populated Balinese island of Nusa Penida. It had been nearly 15 years since I’d piloted a motorbike, but renting myself a scooter to take over on the ferry was the only way to join the adventure, so I went for it.

Along the way, I was reminded just how many metaphors for living well present themselves to you when riding a motorcycle. (I think that’s why motorcycle analogies are the primary language of my good ol’ pop.) Here’s a summary of what I learned over the twists and turns of a few days’ jungle ride.

I made the scooter’s owner, Dayu, a little nervous, as I asked her to walk me through all the controls again, explain it had been over a decade since I’d ridden. It takes an hour and a half to ride just to the port city to even catch the ferry, and then, as we’ll learn, the roads on Nusa Penida are no joke. She definitely didn’t love the idea of me, as an apparently new rider, taking her bike all the way there.

Our hostel also has a long driveway that connects to the small parking lots of two other hotels, so I was able to spend the next half hour or so slowly turning circles between the parking lots, and making my way up and down the driveway.

Dayu stood at the top of the driveway with shoulders tensed, watching my practice laps.

Apparently I began to look more secure as I began to feel more secure, because she soon relaxed and went back inside. Throughout the evening, I made my first interactions with Ubud city traffic, my first gas station stop, and found a basic level of competence, if not yet comfort.

It was good I did, because the next day brought much faster speeds (up to 70km/hr on that first stretch to the ferry), and much windier roads once we were on the island. Each section of riding brought progressively more aggressive challenges, which I was able to handle because I’d taken time to let myself really work through that first level, the day before.

Had the actual trip out been my first ride, I would’ve been on total overload. (And Dayu would have had to stress all weekend).

I so appreciated that care for my wellbeing, and was cautious not to give in to the impulse to feel pressured by having faster riders ahead and on my tail, who I imagined might feel impatient with my slow pace.

“Ride your own ride” is a phrase I’ve often heard from my dad, and I grabbed hold to it squarely on this trip. Sure, there were times that meant I lagged behind the leaders a stretch, but as the more confident riders, it was their job (thankfully), to slow and wait for me before any navigation changes, not my job to ride beyond my skill level, just to catch up.

And what a beautiful practice of the “you do you” overtone that’s informed so much of this whole Bali trip for me. The Nusa ride was sort of a chance to take that practice to the next, very physical, level.

Free-flowing traffic, with lots of passing in every direction is very much the norm here in Bali. There aren’t really lanes per say, traffic flows on the left hand side, as a general, but fuzzy guideline. Vehicles pass whenever and wherever there’s space, since traffic can’t completely slow behind a crawling scooter loaded with an entire family, or giant boxes of home appliances, or a whole harvest of bananas.

I was definitely not comfortable passing yet, on that first morning ride to the ferry. I mean I’d only set wheels on real roads with other cars for the first time the night before.

But it was necessary. And the pack leader on that segment would wait for long stretches behind slow traffic, only herself passing when there was an obvious large window, long enough for me to cautiously creep my way through as well. I cursed her under my breath every time she did it, but really she chose very safe and supportive moments to gradually up my challenge level, and with it, my confidence.

Same with life, just when you start to get used to the feeling of the earth under you, it’s likely to change. Expect this, and you’ll be much happier for it.

The habits you form in non-tense situations will be the habits you revert to in emergency situations, so I practiced choosing just one. Regardless of the pothole, oncoming traffic, or wandering monkey that showed up in my line, I swerved, or I braked. Never both.

I was diving into the details. Can I make this turn happen by leaning just my one hip, instead of my whole body? Can I make the next turn just by creating more wind resistance with my knee? Can I accelerate more smoothly instead of more aggressively?

Bali is continually reminding me that constant curious inquiry is a fabulous foundation for a fascinating life.

This feels to me like what happens when we’re walking following someone’s footsteps, and start to compare ourselves with them. At just that wrong distance, we see the light that bounces off of them in a way that hurts and blinds us.

If we get a little closer, we can see their struggles and their humanity, and come back to the warmth of compassion.

If we get a little farther, we can stop focusing on them, get our eyes back on the road in front of our own selves.

After another couple hours, we made our way to the fabled “Angels Billabong”, a site that’s deceived many who look for it, but fortunately my savvy traveling companions found the elusive sight. There, otherworldly craters filled with the tide-shifting ocean water, creating more natural pools. You had to be a bit cautious here to not be swept out to see with a swell, and the descent into the most interesting pool was a nice mini bouldering challenge. I loved every minute of it.

Just because you’re on one sort of ride doesn’t mean you can’t move in other ways too.

Take a break, change it up, surprise yourself.

A life full of adventure waits.

(And in case you’re wondering, the bike in the picture isn’t the bike I was riding.  I was on a little Scoopy. I just don’t currently own a camera, since I sacrificed my iPhone to the Gods.)