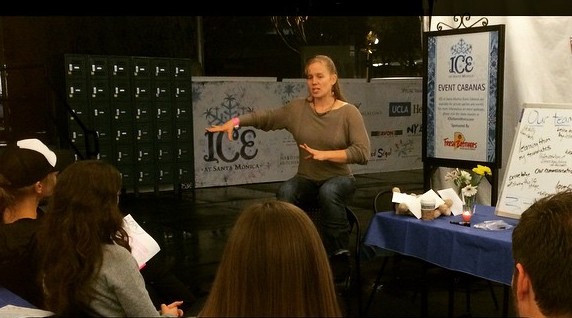 2008. The nation is in a liquidity crisis, and I can’t get a student loan for my non-accredited grad school, so I’m putting tuition on credit cards. (With the full intent to balance transfer to a 1% for life card later, to pay off over time, which I did, but still…) I’ve been collecting unemployment for almost a year, since getting fired from the big corporate gym where I was a personal trainer, because I didn’t agree with how they did business (and so wouldn’t play by their rules… oops). I’ve spent the year working to build a mind-body personal training practice, mixing my physical background with the counseling skills I’m learning in grad school, but aside from one happy guinea-pig customer, I’ve not found any traction yet. There’s only one person in the world who likes my work so far, and even she isn’t paying “full price” for it… but giving her the best sessions I could just feels like the most “real” thing I could be doing to build my business.

I’m 6 weeks away from unemployment running out, credit cards being maxed out, no way to pay rent, having to drop out of school, move back in with my mom, and start over. I don’t know what to do except put one foot in front of the other, and keep trying to build.
—

I often wished I didn’t have the entrepreneurial pull in my blood. I longed to feel satisfied with the simplicity of getting up and going to work each day, like I saw much of the world around me doing after high school and college. Somehow the nagging feeling that I was supposed to be living out some grand ideal wouldn’t go away.

I’d been raised on entrepreneurial values: self-determination, understanding rules in order to make them work toward my own ends, a commitment to playing a bigger game, and the ceaseless quest to be a better human. They were beautiful. And yet, they left me tied in precarious knots.

Like the case in 2008. I’d crafted a vision. I’d written it out in ideal scenes, and called the universe in to help. I’d put in the physical work – testing my services, trying to collect results and testimonials, putting together packages, fliers, and spreading the word through my community of what I was offering. But aside from this one client, it just wasn’t taking.

But right at that fateful do-or-die point, an unexpected opportunity emerged. Remember that one happy guinea-pig client I mentioned? She happened to see a post on an email newsgroup of a personal trainer looking to sell her practice.

This one single client who liked my work thought of me, when she saw it, called me, and connected me with the original poster.

The trainer and I talked, and started to find a good fit. After just a few negotiations, and nothing more than minor road bumps, I stepped into a fully existing business. Granted it was a tiny business with one practitioner, and it wasn’t explicitly the mind-body work I’d wanted to be doing, but it was close enough, for now, and provided immediately about 3x the amount of money I’d ever made before. I was saved from my jam, and solvency plopped itself right in my lap.

There’s a principle I hear some spiritual teachers recount, that effort is never wasted. While we’re here on this planet, passionate engagement is a good thing. That said, there are areas where your effort is likely to yield more dividends than others.

I would later go on to take a business course with Noah Kagan, wherein it was pointed out just how much time would-be entrepreneurs spend “playing at business” (ie: designing fliers and business cards, agonizing over the perfect logo, writing endless marketing copy), instead of actually “doing” business: selling a product or service to customers.

When I look back at 2008, it was the “doing business” in the business I was trying to build – delivering my service to a customer, that opened the door to the totally unexpected opportunity that awaited me. My gift cards, my fliers, my spreading through social networks what I was up to, none of it ignited as much growth as the act of actually doing the work I thought I wanted to be doing… Even though it was only one discount client, that one client changed everything.

You don’t have to walk the entrepreneurial path, in order to Lifecation. And I don’t think it’s a path for everyone. But if you haven chosen this noble challenge… how much of your time is spent “playing at business”, and how much is spent actually delivering the product or service you intend to be providing with your business? In my experience, that’s what opens doors. There’s a big beautiful world of opportunity out there. And it starts with doing the work.

—-
This piece is the first of what I intend to be a series, exploring some of the key challenges, lessons, and milestones of the entrepreneur’s journey, as it’s shown up in my life. I don’t think you need to be an entrepreneur to Lifecation, but it’s one possibility – and it’s fun to talk about!

3 thoughts on “The Path of Entrepreneurship: Doing the Work”