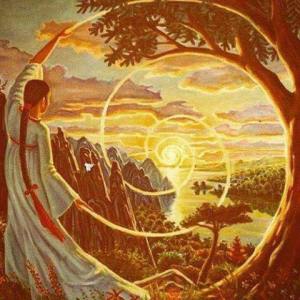 You may have noticed a few scattered references to the Mayan calendar throughout my blog lately, and I think it’s time to fill you guys in. Here in Bali, I’ve taken a dive into studying this ancient way of time-keeping, and it’s opening a lot of interesting positive psychological area for me. They say the best way to learn is to teach, so I’m going to share with you, what I know.

One of the most beautiful components about the calendar, as I’ve been taught it, is that it isn’t a dogmatic system where information is handed down from above, but rather a path of inquiry, where we each find our own resonance, from deep within our beings.

Thus, I can only speak from my experience with this study – so that’s the version of the story you’ll get.

I didn’t know exactly why I came to Bali. I simply knew I had to get away from the way I was doing life, back in the States. I’d become deeply enmeshed in hyper-responsibility, relentless ambition, and crippling attachment to my desired outcomes. I was working away, like any good American entrepreneur, but I felt part of myself missing. I felt out of touch with life and nature, inflexible and out of flow.

I certainly didn’t come to Asia to study an archaic South American calendar. When it began to present itself to me, I was initially sent into a healthily skeptical western recoil, by the seemingly unapproachable language of “galactic signatures” and “harmonix matrixes”. I mean, they’re right up there with “rainbow bodies” – another thing I had no idea existed, until I came to Ubud where talking about them seems to be all the rage.

Additionally, the 2 ½ day calendar intensive that I was being invited to attend was phrased through the theme of “purpose” – a word that, in my experience, has been all-too-frequently used synonymously with “career”. As in, “I can’t have fulfilling work until I find my purpose”. Or “I’d love to start a business, but I haven’t found my “passion” yet (another synonym for “purpose” or, “ideal job”).I had zero desire to spend three days looking at that.

I turned down the invitation to the course.

Another opportunity arose, then, to come to an afternoon workshop with the teacher of the course, and feel out what we were actually talking about here, before making that decision final.

Somehow, I ended up at that afternoon workshop. It didn’t take long after meeting my sweet teacher Vasumi, to start to get curious, and subsequently enthralled, by this way of looking at the world.

Vasumi explained that the Gregorian calendar, with it’s 12 weird months and odd-ball mix of 28/29, 30, and 31 days came to be, because of political struggles for power and ego. Legend has it, Julius Ceasar wanted more days in the month named after him (July), so he made it such that July would be a longer month, with 31 days. Apparently, Augustus followed later, and wanted the same ego boost, so altered the calendar again to lengthen August. If we entertain this origin story, then the entire foundation of time-tracking that we base our lives on, is rooted in egoic struggles for control and power. It certainly makes sense to me that subconsciously reinforcing that energy throughout our lives each day might tend to bring out more ego battles and need for control within our own selves.

Might that be part of why I’ve struggled to relax, and always felt like there’s some problem to solve? Do I feel like there’s always more work to do, because the calendar I base my life around is fundamentally based around ongoing struggle?

I was fascinated by this possibility. If simply starting to look at the year in a different way might start to reinforce harmony, instead of reinforcing struggles for dominance, it was certainly worth a shot to explore it!

I said yes to the 2-day immersion.

Through it came deep learnings, energetic transmissions, new friendships, buckets of tears, a wellspring of poetry, and a willingness to let life be magical again.

Let me speak to one elephant in the room, real quick: I don’t know anything about prophecies and predicted events, and as far as I can tell, the calendar stopped in 2012 because the Mayans simply chose to stop writing the series of infinite cycles somewhere. (Like, they just ran out of paper). I could be wrong on all that, but it’s all outside of the scope of my current education.

What I do know, is that the Mayan calendar seeks to track the energetic cycles that all things in the natural world go through. Just like plants and people have life cycles, and oceans have tides, and ideas appear and then blossom into action, before fading away again… This system suggests that there may be a fundamental, fractal, cyclical harmony to the world around us, and us within it.

I say “may be”, because the calendar, as I have been taught it, and as I mentioned, is really a framework for a process of inquiry. It suggests that we may see certain patterns, and its up to us to live with the questions of how that shows up… the process of asking and answering can open surprising insight into our lives. The energies expressed in the calendar continue to evolve over time, just like everything else in nature, so as we explore living with it, we’re in fact writing what it is now, together. Thus, a fundamental approach of questioning and accepting replaces the Gregorian foundation of authoritative telling and wrong-making.

This is where the second huge psychological benefit of working with the calendar emerges, for me. This is difficult to share, because I have enough psychological education and self-help tools, that I “should” already have been seeing the world differently, but here’s my truth:

More often than I care to admit, the remaining (likely many) years of my life haven’t looked like a grand adventure, but rather a long and laborious problem to be solved. (“You mean I have to keep figuring out how to generate income for the next 5 decades??”) Despite my knowledge and work with gratitude, all too often, each day hasn’t looked like a new gift, but a new task. “What to I have to make happen today?”.

This was my old, vocational way of looking at the word “purpose”. You may also recognize that controlling energy “what do I have to make happen?” from our Gregorian calendar origin story.

Now, using this new path of inquiry, my inner question has changed. Through the practice of watching Mayan Calendar days unfold, I’m asking “How will the universe show up today?”. My default orientation is shifting to fascination and willingness, rather than obligation and dread.

So what are these days I’m watching unfold? The calendar is made up of cycles of 260. For simplicity’s sake, we’ll say a complete round of the calendar is 260 days. (The calendar, like nature, is fractal, so this could also track units of months, years, or series’ of hippie dance parties, but we’ll stick to days for now.) The days progress through the cycle, each day with a combination of two elements: 20 possible fundamental essences x 13 actions that each of those essences can show up as = 260 days total. As an interesting note, 260 days is also supposedly the length of time from human conception to birth.

These 260 combinations (“kin”) may provide us a door to deeper understanding and acceptance of ourselves and others. Theory holds that while we each move through all of these kin, the energies at play on the day we were born, form a fundamental and lasting part of our character throughout this life. (Which sort of makes sense to me, since so much of a baby’s brain structure forms after it’s birth… the factors influencing it on that first squishy day could likely get locked into the newly-forming neurology). This may sound familiar, due to its shared essence with the popular time-keeping system of astrology.

What I found surprisingly compelling about the study of birth-kin though, was the greater context it offered for my life. I am taught that your soul chose to be born on the particular day it did, because it had a particular role to play, in a particular purpose for the good of all of us. For example, I’m a Resonant Serpent, born in the Storm wavespell So it could be that the overarching Earthly purpose this life is (in brief): to attune to strong emotional energies to inspire a sense of aliveness in others, triggering them to stir up their own energy for change.

Hey! Blogging is one of many ways I do that!

And when we start looking at other people’s birth kin as well, it suggests that they also have a particular role to play, toward a particular piece of our common growth. They, too, are exactly perfect as they are – for their own Divine Purpose. Studying the calendar automatically attunes me for curiosity, acceptance, and cooperation.

Using the Mayan Calendar to treat life as a process of inquiry and contribution pulls the worried pragmatism “how to make a living” out of the driver’s seat of my decisions. It puts fascination and soul in the driver’s seat instead. And it’s starting to look like that shift-change is why I came to Bali, in the first place.

(Second part to follow.  If your curiosity is piqued and you want to look deeper in the meantime, feel free to poke about Vasumi’s website at http://timewaves.org. Image also sourced from that site.)

5 thoughts on “A Brief Introduction to the Mayan Calendar”